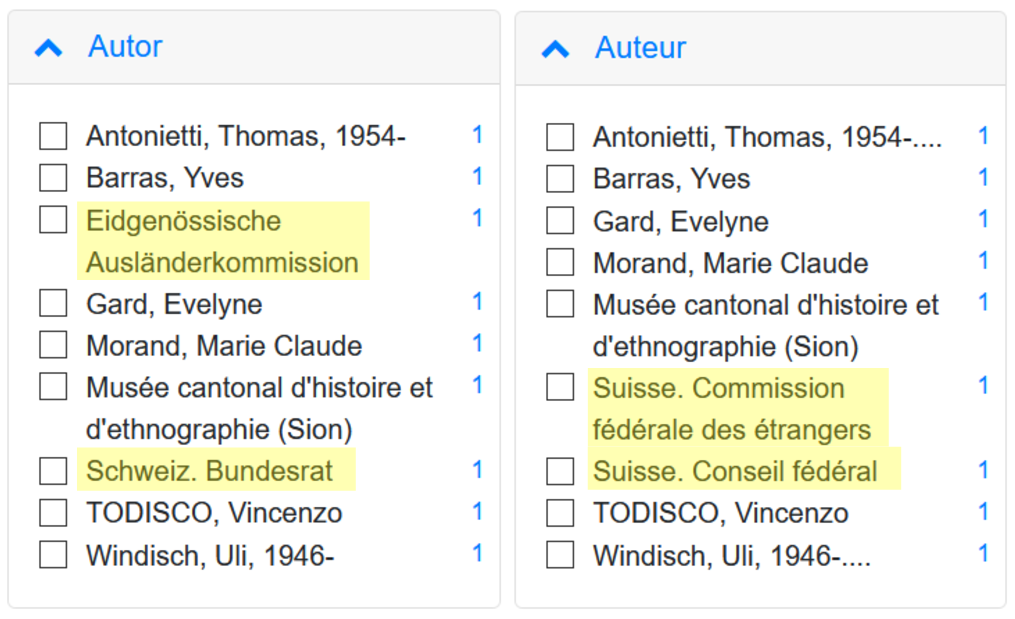 With the integration of corporate bodies in its data model, RERO ILS makes the ambitious objective of multilingualism a reality, as promised by the MEF project. The end user will not only have access to an interface in several languages, but also to data in several languages. This is a Swiss obligation! 🇨🇭

The multilingual nature of the data is based on the project MEF - Multilingual Entity File. The project page explains in detail how the service works. The principles are summarised below:

Multilingualism is characterised by three functionalities in the interface.

1. Displaying the names of persons and corporate bodies for the documents

These names are present in the result list, in the detailed view of a document and in the patron account (loans, history, requests, etc.). When the language of the interface changes, the German or French form is displayed.

In the image below, a document is shown on the left in the German interface and on the right in the French interface. It is not only the interface elements that adapt to the language, but also the names of the authors. The transcribed data, such as the statement of responsibility, obviously do not adapt, since they must represent the document faithfully. 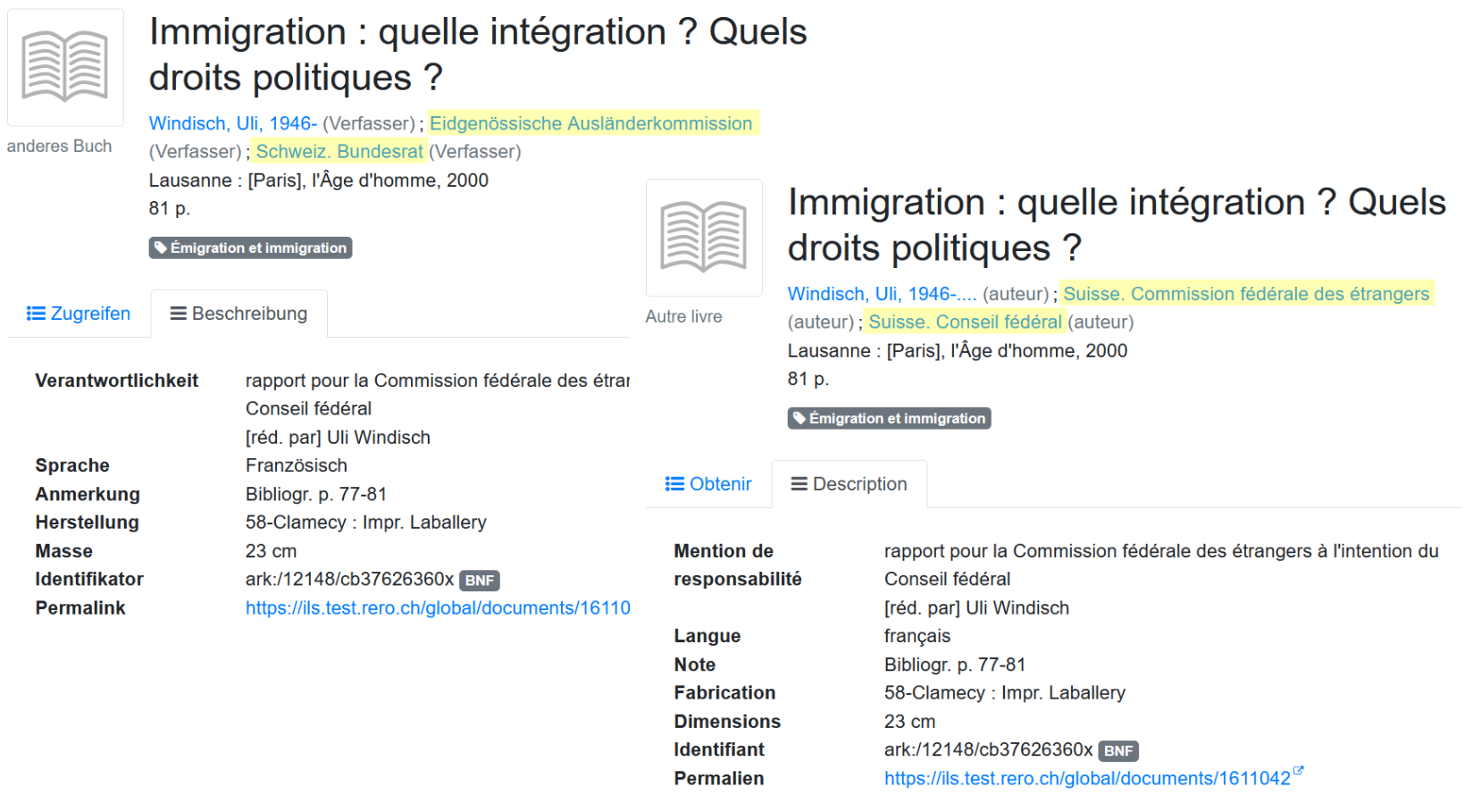 When the interface language changes, the German or French form is displayed.

3. The search bar and autocompletion

When the interface language changes, the suggestions are displayed in French or in German. The search is of course performed in all languages.

In the image below, the interface is in German but the user searches in French. RERO ILS will therefore provide suggestions in German if possible. 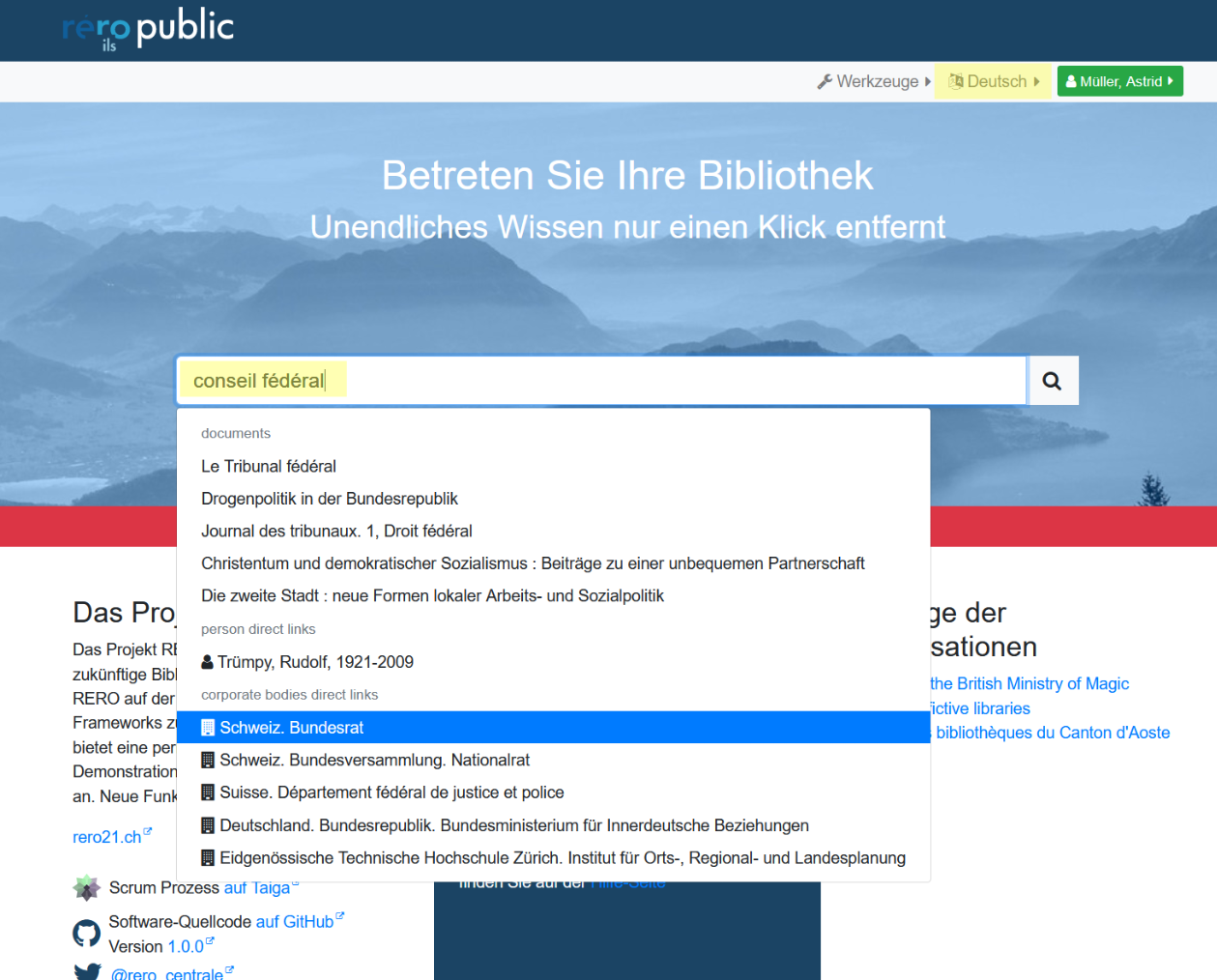 Cataloguing with or without entities

Multilingualism therefore only works if there is a link to an entity. When this is not the case, the librarian can choose to create the entity (directly in the IdRef or GND tools) or to enter an authorised access point without an entity (see image below).

We use the two words indifferently, but we clearly prefer entity. Indeed, the expression authority dates from the references within card catalogues in drawers. In the semantic web era, it has become more common to speak of entities. These are no longer limited to a retained form and rejected forms, but can also include many other structured data. It is therefore a terminology that we consider to be more appropriate.

This article was previously published on rero21.ch

2. IdRef is a dataset of French-speaking authorities, maintained by the French Bibliographic Agency (ABES) and used by different platforms of French scientific institutions.⬆️