What do librarians think of RERO ILS?

July 12, 2022 marked the first anniversary of the implementation of RERO ILS in the libraries of Bulle (Musée gruérien), the Wallis network and the RBNJ (Réseau des bibliothèques neuchâteloises et jurassiennes). On this occasion, we wanted to gather feedback from the professionals about their experience with the software during this first year of use. About a hundred librarians accepted to take part in a satisfaction survey. Their answers were anonymous.

The main objective of this survey was to assess the satisfaction of all librarians who use the software with the aim of:

The elements of RERO ILS were translated into different work tasks for which respondents could indicate how functional they were.

The functionalities related to the circulation desk such as checkouts, checkins, requests and patron registrations, are the most appreciated among the librarians of the network, just ahead of cataloguing functions. Less than 4% of participants consider these tasks not functional at all and a large majority judge them somewhat functional or even very functional. These results are gratifying because cataloguing and document circulation are among the main activities of libraries, and have the greatest impact on their public. Therefore, teir operational efficiency is essential.

While the functions related to search still need some improvements according to librarians of the network, it should be noted that, since the survey was passed, a [new update] (https://bib.rero.ch/help/notes-de-version_en/) has added much needed functionalities in this area: the facets, central in the filtering of search results, have been enriched and several bugs have been fixed. The development team keeps working with users to identify important areas of improvement.

As the graph above shows, the general satisfaction with the functionalities of RERO ILS is not yet unanimous but tends towards the positive: almost 60% of people state to be rather satisfied with the current functionalities. The constant work of the team seeks to answer the requirements of librarians, as well as the effectiveness of their professional tool, and to continue to increase the rate of satisfaction with each update.

The most appreciated elements

In order to allow users to express themselves more extensively, the survey included open-ended questions that allowed us to collect comprehensive and articulate responses. To analyze them, we counted the elements most often mentioned in these answers and created word clouds with these concepts. The most appreciated elements of RERO ILS are its interface and its cataloguing functionalities.

In particular, the interface was considered user-friendly, modern, better than the old system, readable and intuitive. Most respondents also welcome the cataloguing interface, which was described as simple, fast and pleasant to use. For professionals used to cataloguing in MARC21, the transition to a very different editor was not a foregone conclusion, but work of the development team on this next-generation cataloguing editor, quality of training, and collaboration with librarians seem to have resulted in a tool that librarians almost unanimously enjoy. In addition, a number of respondents expressed their gratitude for the work accomplished by the RERO+ team both in the development and support of the software. 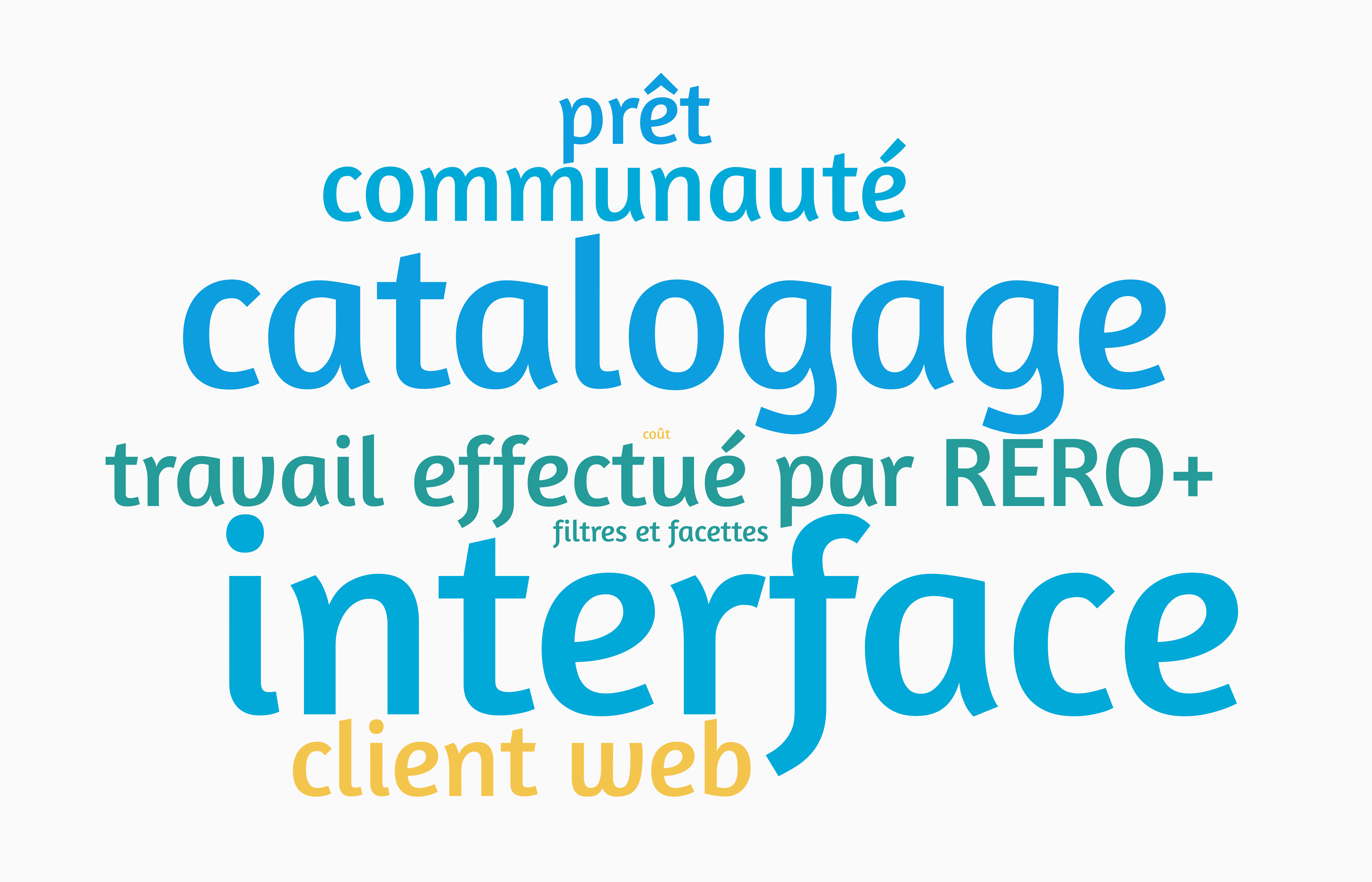 As suggested by the results described above, a majority of the improvement needed are focused on two points currently under development: improvement of the search features and subject indexing. The latter will soon be managed in RERO ILS with IdRef data (see previous post for more details).

Taking the results into consideration

The results obtained through this satisfaction survey are useful in two ways: on the one hand, they allow the RERO+ team and user group to adjust their list of priorities in order to meet the needs of the ground staff (search, subject indexing, etc.); on the other hand, they confirm that all of the work done on the development and implementation of RERO ILS has not been for naught. Of course, the system is still young and improvements are possible, even necessary, but it is quite well appreciated by a majority of librarians, and some of its main functionalities, such as cataloguing and circulation, are acclaimed by its users.

In the future, the development team will focus its efforts on the elements that have been deemed less functional, notably improving the search features, allowing a more ergonomic export of statistics, and reworking the serials management. The ongoing enrichment of the RERO ILS online help for professionals is of course also part of these important aspects. Finally, RERO+ will continue to give priority to the high availability of the RERO ILS servers, but also of its entire team to serve its client institutions.